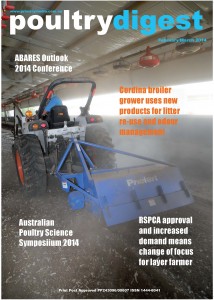 Poultry Digest is the only independent commercial publication delivering industry news to the layer (egg) and broiler chicken meat industries in Australia and New Zealand. We also publish information of other commercial poultry species like duck, turkey and quail.

The magazine covers new technologies plus scientific and equipment advances that contribute to increasing productivity while better managing costs.

Typical issues of concern to the poultry industry in Australia and New Zealand apart from profitability, are food safety, and consumer perceptions, biosecurity, energy costs, and more recently sustained attacks from animals rights groups and increased pressure from regulators over labeling issues as consumer demand for free range products increase.

Though we tend to focus on conventional large scale commercial broiler and layer operations we cater to the increasing interest for free range and other alternative poultry production systems. Grower stories are a mainstay of  Poultry Digest editorial pages.

Deadlines for advertising bookings and editorial are 1st of the month (or closest working day) of the second month of issue date, so for June/July 2017, 1 July 2017.