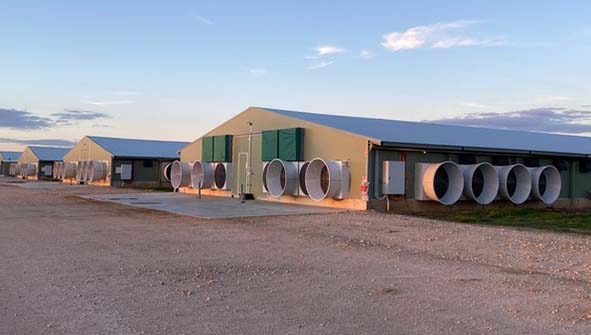 Originally the plan was for Poultry Digest to join SKOV’s Export Manager Arne Overgaard on a trip to visit the farms near Griffith to learn about the extensive testing conducted by ProTen.

Covid 19 put a stop to that idea but Bill suggested we visit him at North Sydney to learn about the exercise to improve efficiency in both shed ventilation and energy use.

Max Bryant, back in 1987 in New Zealand, started with one shed and developed as a grower of broiler birds for Tegel, and later expanded to a seven farm operation by 2001 and established his organisation as ProTen.

In 2002 ProTen moved into the much larger scale Australian market and by 2006 sold its New Zealand interests and reinvested capital in growing Australian operations.

As a listed company, ProTen expanded rapidly from 2009-2018 and then further expanded, acquiring a 28 shed, then 32 shed farms in South Australia.

Finally the Rural Funds Management (RFM) poultry operations were acquired in 2019 for $72 million.

“Current and future expansion plans include a refurbishment of the 110 RFM sheds and we have instigated a DA process for three more new farms,” Bill revealed.

ProTen has made significant investment in renewable energy and its solar energy initiative has made many of the farms self sufficient in daytime, plus the company sells significant amounts of power back to the grid.

Efficient fans are critical to ProTen’s  energy saving strategies as well as other production efficiencies so the company embarked upon a series of trials at the Narrandera farm.

“With the prospect of new sheds being built as well as an upgrade to the RFM operation, selection of the best fans option was an important  issue for his company,” Bill stated.

The fans involved were Euromme EM50, Dacs Mag Fans, large SKOV DA 1700 ‘Blue Fans’ and a new SKOV fan proposed for release to the market later this year, the BF 50.

Farmmark, SKOV’s certified service partner, was involved in installing and programming the DOL 539 computer and ensuring that the full SKOV system was operating with the best efficiency and delivering optimal performance.

A critical factor in the design of the SKOV BF 50 fan is that it readily fits into the hole when replacing other ‘50 inch fan designs like the Euromme EM 50 fan, the most numerous of ProTen’s main fan types.

Bill commented that he liked the stepless control system of the BF 50 fan and that it took less labour input to install, but the key issue was performance.

Comparison tests between two similar sized sheds with similar stocking density over two batches showed power used for ventilation purposes, which as Bill pointed out, “accounts for about 90% of power consumption”.

Arne Overgaard explained some of the critical design features of the new BF 50 fan which, apart from its ease of installation in existing shed walls, includes the option of a cone or no cone.

“The BF50 design features a motorised shutter (which requires a 24 volt power supply) and this contributes to a much ‘tighter’ shed.

“In a fan comparison, between fans with air controlled shutters and the BF 50 with motorising shuttering leakage, in preliminary trial figures measure in m3/h@40 Pa 570 (air) 290 (motorised),” Arne said

“Further wind influence on shutters was high in air controlled units when compared to motor controlled fans like the BF50.”

Arne went through some of the key selling points for the new BF 50 fan.

“Firstly it is a direct drive unit with a permanent magnet motor which eliminates maintenance costs and reduces energy loss.

The BF 50 is made of thermoplastic and stainless steel – noncorrosive materials that, by far, better withstand the harsh environment in a modern shed.

“The BF50 delivers precise control of minimum ventilation when compared to typical galvanized box fans and eliminates the requirement for DA600 and 36 inch fans by delivering higher performance at a potentially lower price.

It is anticipated that it will be mostly used to retro fit in existing wall spaces. The BF 50 delivers stepless operation in MultiStep systems.

“The product is undergoing an intensive test period in both pig and poultry sheds with 70 units operating on eight different sites located in six countries, including Australia,” Arne revealed.

The anticipated date of sale release is June 1, 2020 with the first deliveries in early July 2020,” Arne concluded.

ProTen seems to have firmly grasped the nettle of energy shock with a combination of linking renewable energy to super efficient equipment that reduces their energy use while maintaining optimal production levels.

Bill reports that he expects ProTen’s energy strategy, including the use of the new SKOV BF 50 fans, will repay their investment in between four and five years.

Certainly in the comparison tests, the saving created by the SKOV BF 50 fans was up to $800 on the first batch and more on the following one.

Smart fan systems have only been in existence for a relatively short time and were a logical extension of ever more advanced poultry and pig shed climate controllers.

Not long ago Australia boasted the lowest energy costs outside the Middle East, but that has changed more recently.

In Northern Europe and Denmark in particular, energy costs rose well before the same happened in Australia.

It’s probably no coincidence that two of the growing number of controllable fan products come from Denmark or their near neighbours.

In fact Denmark has even higher energy costs than Australia, despite having advanced renewable capability.

In the future, energy saving linked to green house gas reduction may well become the issue of the day after we, as a society, have overcome the COVID 19 problem.

So there are all sorts of reasons for reducing energy costs in an energy hungry industry and in fact the next wave of consumer concern may be related to environmental issues rather than just welfare related production systems.

Another critical issue that effects agricultural production in Australia is water shortage, and the poultry industry is no exception.

Bills informs us that along with renovating the old RFM sheds, a two year project, expansion in the Tamworth region to cater for increasing production for Baiada’s operations, water supply is creating the need for some creative thinking.

However, in large volume, slim margin operations like poultry production, incremental savings are vital and $800 a batch through better fan technology use, is truly worth the effort and investment.