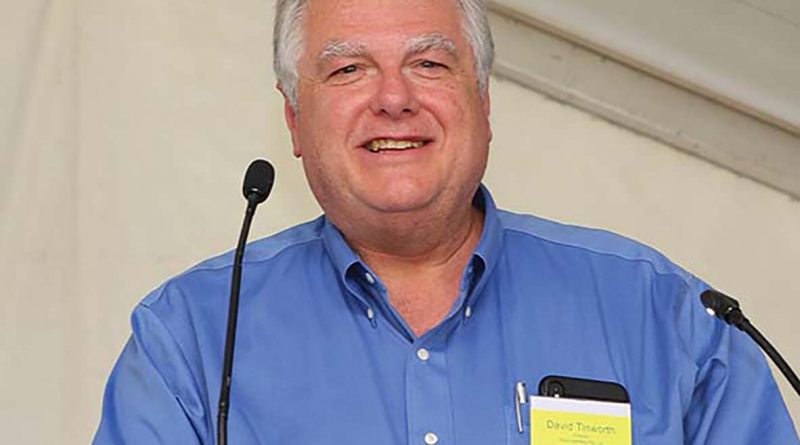 On December 8, 2019 there was a great turnout of poultry industry people to help Bioproperties celebrate the official opening of its Glenorie NSW facility.
It would have been one of the very few days this Summer not affected by smoke from bush fires and several eminent speakers contributed to a happy and informative event.

Guests assembled, Dr David Tinworth, Bioproperties MD, followed by Anthony Roberts, Executive Chairman and Director James Judd welcomed guests who had travelled, not only from around Australia but from the USA, UK, Japan and Iran.
Dr Tinworth’s address included photos of ‘early days’ as the Bioproperties enterprise grew.
It is worth noting that two of the individuals that are a key part of the growth story, Associate Professor Kevin Whithear and Dr Chris Morrow, have been recognised as ‘Poultry People of the Year’ at recent APSS events.
Poultry Digest first visited the Bioproperties facility with Dr Grant Richards, also mentioned in Dr Tinworth’s introduction to the event.
It was a truly international gathering that represented the growth of Bioproperties into a global supplier of vital vaccines for the poultry industry.
International guests included Gensuke Tokoro, founder of NBI (Japan), Toshi Fukui, President, Zenoaq (Japanese distributor), Bailey Reynolds and Susan Reynolds (USA based ASP- Gel-Pac manufacturers) and Howard Wilder, Karen Bowden, (Pharmsure Veterinary Products Europe – EU distributor) Peter Cargill and Samantha Cargill  (Pharmsure International – UK distributor).
The first speaker, a truly famous pioneer in animal health vaccines, Dr Arthur Webster, spoke about ‘The Glenorie Site, a brief history’.
Dr Webster is one of Australia’s most distinguished veterinarians, with leadership roles over the years that have included Council of the Post Graduate Foundation in Veterinary Science, Executive Committee of the USYD Veterinary Science Foundation and Veterinary Clinics Advisory Board and CSL Board.
He was a key player in commercial vaccine development in his father’s company, Arthur Webster Pty Ltd, significantly growing the company and the industry.
The vaccines produced by this respected Australian company on this very site in Glenorie, made major contributions to the health and productivity of Australia’s farm animal and poultry sectors and to the health of companion animals.
Dr Webster led the development of a vaccine to combat parvovirus, a serious and fatal new disease in dogs that appeared worldwide in the 1970s.
His company’s parvovirus vaccine was the first to be produced in the world and was distributed internationally.
Apart from being informative and of interest to anyone involved in the animal health industry, keeping his talk to around 15 minutes was a feat of brevity in itself.
The Glenorie site has not only been occupied by Dr Webster’s company but at some time by just about any serious producer of animal health products and vaccines in particular.
Today, the Bioproperties owned facility has been subjected to a detailed renovation with the result that it can supply new and existing vaccines to growing poultry industries around the world.
Ms Robyn Preston MP and Member for the seat of Hawkesbury in the NSW state legislature, spoke about the importance of the kind of innovation in the field of biotechnology that Bioproperties brings to Australia and NSW in particular.
The official opening speech was delivered by Wayne Terpstra – Assistant Secretary of Animal and Biological Imports, Animal Division of the Department of Agriculture in the Federal Government.
Wayne is a career law enforcement and regulatory professional with more than 30 years’ experience in law enforcement and compliance management functions across the Australian government.
He has significant regulatory experience and a detailed understanding of the international trade environment including supply chain operations, logistics, food and agricultural product security, trace back, corruption risk and national security.

Also he has led a broad range of regulatory activities across several Australian government agencies including compliance and enforcement policy and practice, intelligence, technical and scientific functions, client/staff verification, system vulnerability assessment and mitigation, stakeholder engagement and corporate business support functions.
Wayne currently leads the Animal and Biological Imports Branch within the Australian government Department of Agriculture. The branch is responsible for operationally focussed aspects of the import of live animals as well as animal, human and biological products.
He spoke about the dire threat posed, not only to livestock production but human health, of antimicrobial resistance.
“Key factors in the growth of AMR were, a lack of new antimicrobials, imprudent and unrestrained use, inadequate infection prevention and control, globalisation and international travel and poor or slow diagnostics,” he said.
He emphasised the role of vaccines in fighting AMR.
At the conclusion of the speeches Wayne ‘did the honours’ by cutting the ribbon to officially open the renovated and expanded Bioproperties Glenorie facility.
Long serving Federal MP Philip Ruddock, now Mayor of Hornsby Shire, joined the opening ceremony.
Bioproperties Pty Ltd is the major Australian veterinary manufacturer and supplier of innovative live vaccines to the worldwide intensive food animal industry.
Its products are vital in fighting disease and allowing for a reduction in antimicrobial use in livestock production.
Bioproperties has developed a specialised approach to identifying industry requirements for new products during the early stages of disease development.
Working in collaboration with Australia’s research institutions, the company can scale vaccine manufacture and bring products to market within shorter timeframes.
The company’s success in getting concepts through to a marketed product is more than 95%.
While Bioproperties provides vaccines direct to domestic producers of intensively farmed food animals, the company utilises distribution channels established by the large pharmaceutical organisations to reach international markets.
“The company’s ability to make fast decisions, coupled with great technical expertise and a culture of innovation, gives Bioproperties a competitive edge over the large multinational pharma players when it comes to inventing new vaccines,” Poultry Digest was told at the opening event.
“The company has a policy of maintaining stock levels to suit almost all circumstances, whereas some international suppliers experience shortages from time to time,” said Dr David Tinworth.
“The company is strongly positioned to continue growth for both our local and international markets.
“Bioproperties commenced the development of a new $8 million building at Glenorie, and we anticipate further expansion over the next three years to service a growing demand for both new and existing vaccines,” he said.
Bioproperties was nominated for a 2018 BHERT award for industry/university collaboration in Australia.
The company was founded by its Directors, Dr David Tinworth and Mr James Judd in 1989.
The Executive Chairman Mr Anthony Roberts commenced consulting in 1990 as a financial strategy adviser to the company, and later became an active shareholder.
Poultry Digest, since 2000, has followed the rapid expansion of Bioproperties with great interest.
Its collaboration with both the Poultry CRCs resulted in the development of new vaccines and considerable post grad student and researcher skill acquisition.
The Poultry CRC ‘Ideas Seminars’ held at UNE, always included presentations about the work of vaccines under the guidance of Professor Mingan Choct and Bioproperties.
In fact, amongst the many valuable innovations and research projects undertaken during both CRCs, development of vaccines now in production by Bioproperties, are arguably stand out results for industry and commercial development of research.
The growth of Bioproperties has been not only phenominal but fortuitous: in the thirty years since commencing business AMR has become the global health problem for both humans and intensive livestock production.
So far, effective vaccines and their use, are probably the best option for the reduction in antimicrobial dependence.
Today Bioproperties and related companies employ more than 150 staff, more than 70% degree qualified and the company funds in the order of 15 post graduate studies per annum.
The company’s main products carry EU standard certification, with 13 vaccines developed and R&D being conducted with ten universities during their development.
Ten of these products were invented by Bioproperties and brought to market with one or more of products sold in more than 70 countries.
There are six new vaccines in development – ILT, MG304, NetB for NE, Campylobacter – Jejuni and Hepaticus. For pigs, there is a Glässers disease vaccine.
After the official opening ceremony guests were taken on a tour of the new Glenorie facility.
It is, as would be expected of any enterprise producing live vaccines, a complex and well thought out production centre.
Bioproperties’ staff were fabulous in explaining all the intricacies of highly scientific processes and safe sensitive material handling.
Poultry Digest came away enthused and well informed.
It is worth reflecting on the fact that in general terms Australia, whose overall share of global agricultural production is around 3.2%, has traditionally been a recipient of overseas technology and scientific development.
In the case of Bioproperties and the happy collaboration of our leading scientific institutions, an Australian company is delivering much needed vaccines to the world to assist in the ever-growing need for sustainable protein production.